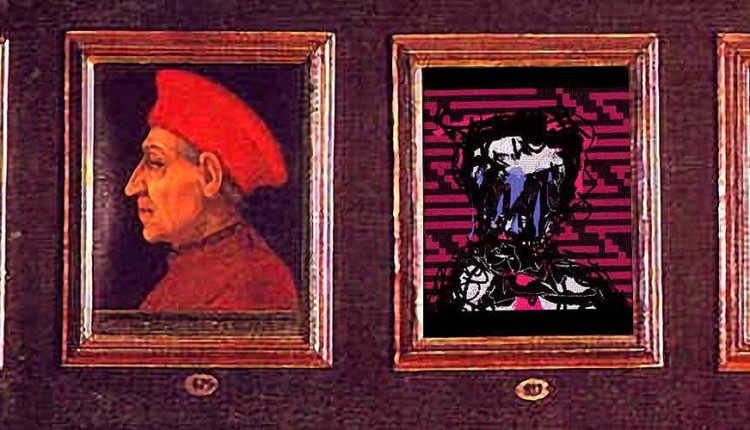 Digital magazine and gallery Artnet gave Cozomo de’ Medici the keys to the castle. The notorious NFT collector took over their very popular Twitter account to raise hell. Cozomo de’ Medici’s thesis is that “the internet killed the yellow pages. Netflix killed Blockbuster,” and NFTs will replace traditional art. A bold prediction, we know, but let’s give the pseudonymous collector the benefit of the doubt and explore his thread.

The story starts with Artnet NFT 30. A list of the 30 most influential people in the NFT world. Of course, Cozomo de’ Medici was one of them. As a publicity stunt, Artnet gave Cozomo control of their Twitter. “And starting now, I will be taking over the ARTNET Twitter! I warned them I may be controversial ;),” de’ Medici said. And then, “Ok frens, so I dropped a bit of a bomb over on the Artnet twitter account. They had NO idea I was going to do this!”

They had NO idea I was going to do this! 😂

Let’s let the world know that WE are the digital revolution 🍷⚔️https://t.co/yP9wjmiTmB

NFTs Will Kill Traditional Art, According To Cozomo de’ Medici

The notorious NFT collector begins by comparing the NFT revolution to the advent of Reality TV. “For almost 100 years, the studios decided which actors would be lucky or talented enough to become stars. But then in the 2000’s, everything changed. The cameras turned from focusing on actors, to every day people. With Reality TV, soon it wasn’t a trained actor who was getting famous, but your classmate, co-worker, or next door neighbor. ”

And those who used both social & reality tv, like Rogan & the Kardashians, built empires

Then, Cozomo turns to art. For centuries, “kings, queens, and noble folk decided which art was relevant.“ Then, the tide shifted, “in the Victorian era of the 1800s, galleries, museums, and collectors began to move markets.” The problem here was that the public had zero access to these artists. By the time they learned “about Warhol or Basqiat, their work has become expensive, the best pieces gobbled up by known collectors and market makers.”

9/ And this is not just in the major markets – London, Paris, NYC – but globally.

I was recently chatting with a man who grew up in Morocco. As he described it, in Morocco there are 5 dealers who make up the “art mafia”.

If an artist gets on the bad side of one, they are done.

Enter NFTs. “No museums. No galleries, other than the marketplaces, and the galleries made by collectors themselves.” A heap of now well-known artists came out of this change of paradigm. But that’s not all, “any artist, from any where in the world, with no invitation, can mint a drop.” Also, the power shifted to the consumer. “YOU can decide which artists will define this generation.“

17/ Not by getting a museum show – but by producing great art, and cultivating a community using digital tools, like twitter and discord.

Now, you may be wondering… is there real size, and real provenance to be achieved this way?

You’re In Control Of The New Art Elite

Then, Cozomo de’ Medici shouts out two artists. Who, of course, are part of Artnet NFT 30 as well.

19/ Or the previously mentioned @XCOPYART, a CryptoArt “OG” who has been minting art on chain perhaps as early as 2016…

Photographer Justin Aversano and Digital artist Xcopy. Who, of course, are a big part of Cozomo de’ Medici’s collection.

To finish, de’ Medici goes all in. “We are the market makers now. We create our own museums. We decide which art defines this generation. We are the digital renaissance.”

The reactions have been mixed. Some people don’t buy it, some people think Cozomo de’ Medici is a genius. In what camp are you? Are you convinced or nah? Is Cozomo exaggerating for effect? Or does he or she really believe that? Is Cozomo ahead of his or her time or clinically insane? And, more importantly…

No, he’s not Snoop Dogg. That was a publicity stunt that worked too well and even journalists still believe.

Love this. I was interviewed earlier today and asked if crypto is going mainstream. My answer was yes, and one of my supporting points was that Snoop Dogg had an anon NFT Twitter account. And now he drops one of the most insightful tweet threads on the future of NFTs. Must-read: https://t.co/ywNVaxpBN7

To answer the title’s question, let’s quote the publication that started this whole mess. In Artnet NFT 30, they introduce him as follows:

“Ever since the mysterious collector behind this Twitter handle emerged on the scene in August, they’ve captivated the cryptorati with a combination of gnomic utterances and sage NFT investment advice, all packaged under a playful identity claiming a parallel between the famous patronage of Renaissance Florence’s Medici family (albeit with a tweaked spelling seemingly borrowed from Seinfeld’s Kramer) and Cozomo’s own pursuits in the digital art world today.”

And about his collection, a huge part of this story, Artnet says:

“With astonishing speed, Cozomo acquired a collection of Art Blocks and CryptoPunks alongside NFTs by Justin Aversano, Tom Sachs, and a host of other artists. He now owns hundreds of artworks, including coveted examples that the crypto community calls “holy grails,” that are together valued in the tens of millions of dollars— including what he calls a “grail of grails,” XCOPY’s Right-click and Save As guy,”

The estimation is that his whole collection is worth $17M approximately. Take that for what it’s worth.