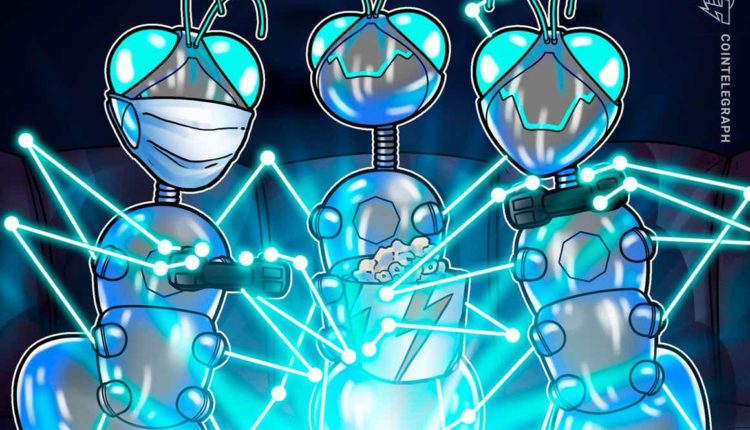 Shrapnel claims to be the world’s first AAA shooter game built on the blockchain. The team is comprised of BAFTA and Emmy award-winning developers behind major franchises such as HALO, Call of Duty, Madden, Bioshock, Destiny, Star Wars, Hawken Skylanders, and Westworld. It is built on the blockchain gaming platform Forte.

The global gaming market is currently worth roughly $180 billion, far eclipsing the global film industry and North American sports. However, most traditional gaming happens on networks that prevent users from acquiring and building in-game assets as the platform owns them. Blockchain-based gaming platforms are disrupting this traditional model by allowing users to own their assets. This is also creating organic gaming economies where users can get paid to play.

In an ask-me-anything session with Cointelegraph Markets Pro, Don Norbury, head of studio at Neon Media, the game’s developer, offered an in-depth take on the emergence of blockchain gaming and what his title has to offer.

Cointelegraph Markets Pro User: When I think of gaming, I think of Galaga, Pac-Man, Tomb Raider, Timesplitters. These games were fun and puzzling and contained adrenaline-filled additions. So how do you keep “Play-to-earn” (P2E) from being button-pushing for dollars?

Don Norbury: Shrapnel is currently a core PC game for the primary game client. We have a rich website for everything beyond the “shooting people in the face” elements. Our longer-term goal is to target a mobile client, but early scoping/focus for a project’s primary game client is critical to success, given the other elements we’re tackling.

We’re not making Cow-Clicker 9000 over here… We’re making an intense extraction-based shooter with creator tools. I think the P2E tracks that have been laid out are a fantastic concept and framework to understand and take into account when designing economies or understanding player/human motivations and incentives. However, the pure versions of games in that space are wildly different experiences than something like Shrapnel.

Our team comes traditionally from a space where we work on something for three years before the public becomes aware of it. While we still believe a certain amount of baking is required (and creative chaos contained), we think there are fantastic ways the community can become involved in the process and grow with the project as features, utility and agency are built and iterated on.

DN: It’s an extraction shooter, lose-your-loadout high-stakes-treasure-hunting design. You bring in your gear, and you need to get loot out. There are a couple of examples of this genre in the space already, such as Escape from Tarkov and the Dark Zone mode from The Division. Still, it’s relatively unexplored and is ripe for a AAA approach where we sand off rough edges and bring a flair for the dramatic equation around world-building and mechanics. Additionally, we have a range of user-generated content tools that range from access to more complex across various asset types in the project. Finally, Shrapnel will be partially built, quite literally, by the community in ways that allow them to own the platform and their creations and to be recognized for their contribution and participation.

CT Markets Pro User: What experience does Neon Media have with games?

DN: Our entire careers are based in AAA game development and transmedia production. So we all have multiple decades of experience building studios, executing globally-distributed publishing projects, and building some of the biggest franchises in the industry. Studios/companies like LucasArts, Xbox, Activision, Irrational, EA, HBO… and projects like Halo, Call of Duty, Bioshock, Star Wars, Madden, Westworld.

CT Markets Pro User: What can the Forte blockchain/NFT platform, or a Neon/Shrapnel investor, bring to the table?

DN: One of the primary issues preventing wider-scale adoption of games in the crypto space is frictional elements and risk. When we think about aspects like wallet/key management,  Know Your Customer (KYC)/Anti-Money Laundering (AML), or transportability of assets, these are spaces for crypto-savvy people. There is an element of familiarity and acceptance. Still, for the average gamer, this is [far] too much. When we build games, we want the player to get in and experience the visceral emotional moments rapidly, even to the point of minimizing the initial install size of a client so you can get in and shoot someone in the face as quickly as possible. Forte is focused on reducing the typical friction and ensuring compliance and future-proofing to allow the game experience to thrive.

CT Markets Pro User: How do you view the future of interoperability? Will this project live on one chain or several?

DN: We are building the protocol with interoperability in mind as much as possible. One of our core pillars at Shrapnel is: “We’re not the metaverse; we’re part of it.” We see blockchain and DeFi as the TCP/IP of the metaverse, and most projects that claim “metaverse” are mostly referred to as “sandbox games.”