This App Lets You Buy Bitcoin Whenever Peter Schiff Tweets 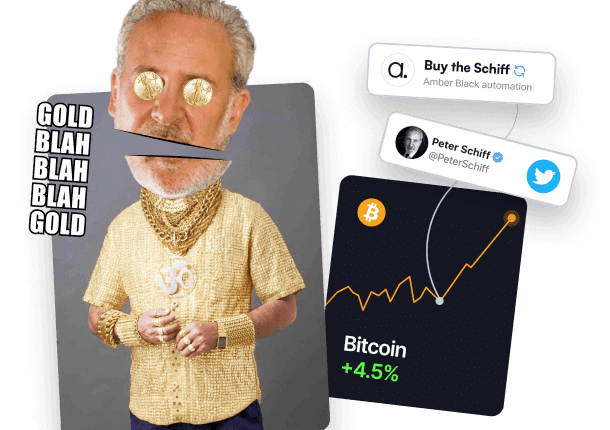 Bitcoin investment platform Amber has introduced a new feature to automatically buy BTC on behalf of a user whenever Peter Schiff, a famous gold bug and Bitcoin critic, tweets about the peer-to-peer currency.

The feature is exclusive to the platform’s paid subscription, Amber Black. Users deposit funds to their Amber Black wallet, select how many satoshis they would like to purchase each time Schiff tweets about Bitcoin, and enjoy their new, comic dollar-cost averaging (DCA) strategy.

Peter Schiff is known for his harsh criticism and outright skepticism about Bitcoin. The gold bug often says on Twitter he doesn’t believe the P2P money has any value and that it eventually will crash to zero. However, his most bold tweets commonly come as the Bitcoin price dips, oftentimes providing unique buying signals.

In March 2020, when Bitcoin experienced a flash crash as news of a new pandemic spread fear around the world, Schiff indirectly called the exact bottom on Twitter.

“With #Bitcoin crashing below $4,000 I don’t feel so bad about having lost all my Bitcoin. At the rate my lost Bitcoin are losing value soon the difference between having Bitcoin and not having any Bitcoin will be too small to matter,” the gold bug tweeted on March 12, 2020.

Schiff had never been a fan of Bitcoin, but he turned sourer after he allegedly lost access to his Bitcoin wallet in January last year. Despite his clear negative stance towards the asset, his son, Spencer Schiff, is a self-declared “former gold bug, now a Bitcoiner,” as per his Twitter profile.