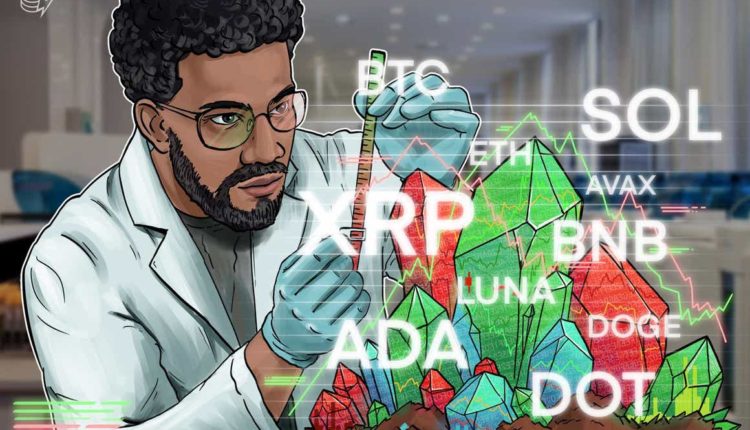 Gold, which is popular as a hedge against inflation, is down roughly 7% this year. Arcane research said in its report that Bitcoin’s outperformance in the high inflationary environment shows that “Bitcoin has proven itself to be an excellent inflation hedge.”

Real Vision CEO Raoul Pal said in an interview with Vlad from The Stakeborg Talks that the recent selling in Bitcoin may have been due to institutional investors booking profits but he believes the selling may be coming to an end.

However, veteran trader Peter Brandt is of the opinion that panic selling has not yet happened, which is known to signal bottoms.

Could Bitcoin extend its decline or stage a strong recovery above $50,000 in the next few days? Let’s study the charts of the top-10 cryptocurrencies to find out.

Bitcoin rose above the overhead resistance at $51,936.33 on Dec. 27 but the long wick on the candlestick shows that traders sold this rise with vigor. The selling continued on Dec. 28 and the price broke below the 20-day exponential moving average ($49,558).

The price broke below the 200-day simple moving average ($47,755) today but the long tail on the candlestick shows that bulls are attempting to arrest the decline. If the price rises and sustains above the 200-day SMA, the bulls will again try to push the BTC/USDT pair toward the overhead resistance at $51,936.33.

On the contrary, if the price sustains below the 200-day EMA, the selling could intensify. The 20-day EMA has started to turn down and the relative strength index (RSI) is below 42, indicating that bears are in control. If the $45,456 support cracks, the pair could plunge to the strong support zone at $42,000 to $40,000.

Ether’s (ETH) failure to sustain above the 20-day EMA ($4,011) could have attracted selling from short-term traders. The price turned down sharply on Dec. 28 and has dropped close to the strong support at $3,643.73.

If the price rebounds off the support, the bulls will make one more attempt to push the ETH/USDT pair above the 20-day EMA. A break and close above $4,200 could signal that the corrective phase may be over. The pair could first rally to $4,488 and then challenge the all-time high at $4,868.

The bears will now try to sink the price below the strong support at $500. If they succeed, it could start a down move to the 200-day SMA ($444) where bulls are likely to defend the level aggressively.

Contrary to this assumption, if the price turns up from the current level or the strong support at $500, it will suggest that bulls continue to buy on dips. A break and close above $575 will signal that the correction may be over. The pair could first rally to $617 and then to the overhead resistance zone at $669.30 to $691.80.

The bears will now attempt to build on their advantage and pull the price below $167.88. If this support cracks, the SOL/USDT pair could drop to $148.04. The 20-day EMA is flattish but the RSI has dipped below 44, indicating that bears are attempting to gain the upper hand.

This negative view will invalidate in the short term if the price turns up from the current level and rises above $204.75. That will clear the path for a possible rally to the resistance line of the falling wedge pattern. A breakout of the wedge will signal that bulls are back in the driver’s seat.

Cardano (ADA) turned down from $1.59 on Dec. 27 and the price has dipped to the 20-day EMA ($1.39). If the price rebounds off the current level, the bulls will attempt to push the price to the resistance line of the descending channel.

The flattish 20-day EMA and the RSI near the midpoint suggest a balance between supply and demand. A break and close above the channel will indicate that the downtrend could be over. The bulls will then try to push the price toward the strong overhead resistance at $2.47.

On the other hand, if the price sustains below the 20-day EMA, it will suggest that bears continue to sell on rallies. The ADA/USDT pair could then drop to the strong support zone at $1.18. If this support cracks, the pair could decline to $1.

The 20-day EMA has turned down and the RSI has dipped into the negative zone, indicating that bears are at a minor advantage. If the price sustains below $0.85, the XRP/USDT pair could decline to the strong support at $0.74.

Conversely, if the price turns up from the current level and breaks above the moving averages, it will suggest that lower levels are attracting strong buying from the bulls. The pair may then rise to $1. A break and close above this level could complete an inverse head and shoulders pattern, which has a pattern target at $1.25.

A strong rebound off this zone will suggest that sentiment remains bullish and traders are not waiting for a deep correction to buy.

The bulls will then attempt to push the price to $103.60. A break and close above this resistance could indicate the resumption of the uptrend. The first target on the upside is $135.26 and then $150.

This positive view will be negated in the short term if the price turns down and plummets below the 20-day EMA. That could pull the price down to the 61.8% Fibonacci retracement level at $71.61.

The AVAX/USDT pair turned down and broke below the 20-day EMA on Dec. 28. If bears sustain the price below this level, the next stop could be $98. A break and close below this support could open the gates for a possible drop to $75.50.

Conversely, if bulls push the price back above the 20-day EMA, the pair could rally to the downtrend line. A break and close above this resistance will suggest that the correction may be over. The pair could first rise to $130 and then retest the all-time high at $147.

The bulls pushed Polkadot (DOT) above the overhead resistance at $31.49 on Dec. 27 but the long wick on the candlestick suggests selling at higher levels.

The failed breakout could have acted like a bull trap, catching aggressive buyers on the wrong foot. This may have resulted in long liquidation, pulling the price below the moving averages.

Both moving averages are flat and the RSI is just below the midpoint, indicating a balance between supply and demand.

If bulls push the price back above the moving averages, the pair could rally to $31.49. A break and close above this level could signal advantage to buyers. The pair could then rally to $39.35 and later to $43.56.

On the other hand, a break and close below the $25 to $22.66 support zone will indicate that bears are in command.

The DOGE/USDT pair could now drop to $0.15, which is a key level for the bulls to defend. If the price rebounds off this support, the pair could remain stuck between $0.15 and $0.19 for the next few days.

The bulls will have to push and sustain the price above $0.19 to indicate the start of a strong relief rally.

On the contrary, if bears sink and sustain the price below $0.15, it will suggest that the downtrend has resumed. The pair could then drop to $0.13 and later to the psychological support at $0.10.

The views and opinions expressed here are solely those of the author and do not necessarily reflect the views of Cointelegraph. Every investment and trading move involves risk. You should conduct your own research when making a decision.