Media Is Adopting A Bitcoin Standard 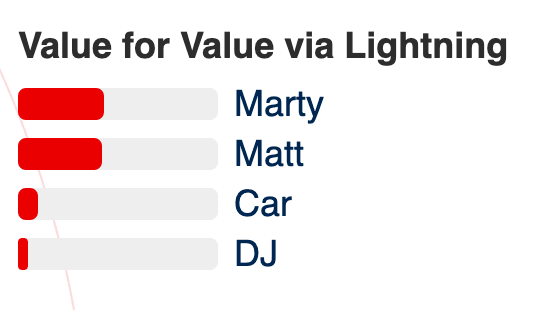 The below is a direct excerpt of Marty’s Bent Issue #1133: “Media on a Bitcoin Standard.” Sign up for the newsletter here.

Bitcoin is revolutionizing media and very few people are paying attention. Your Uncle Marty is becoming more convinced of this by the day. Especially as he gets more acquainted with Podcasting 2.0, the current killer app of smart contracts on top of Bitcoin.

We’ve talked about Podcasting 2.0 in this rag before but for those of you who are unaware here’s a brief explainer; Podcasting 2.0 allow a podcaster to attach a bitcoin lightning network address or multiple addresses in the RSS feed that syndicates their audio file to all of the different podcasting platforms and apps. Podcasting platforms and apps who want podcasters and their listeners to be able to reap the benefits of Podcasting 2.0 incorporate bitcoin wallets into their products so that users can send sats to the lightning address(es) included in the RSS feed as they listen. This allows podcasters to directly monetize their content. Users can send hosts an amount of bitcoin that they believe is commensurate with the amount of value they’ve gotten out of the content. The podcaster can then distribute that value to their team automatically.

I get a solid chunk, my co-host Matt gets a solid chunk, and our producer and developer/node manager get a cut for the value they bring to the operation. Our RSS feed acts as a smart contract because this is where we put in our addresses and the split between the four of us. When freaks send sats to the podcast they are immediately distributed to each of us based off the ratio visualized above. There is no intervention on my end to move the money other than dumping the addresses and the splits into the RSS feed.

This is something very simple, yet also very profound as it will have massive implications for content monetization as time moves forward. You can begin to implement this type of direct monetization into written and video content as well. Artists who produce music could take advantage of this as well as it hypercharges the ability for independent artists to break away from record labels and platforms like Spotify that take a lion’s hare of the revenue produced by their art. If they can figure out how to create a Lightning-enabled paywall for their songs or incorporate sats streaming so listeners pay microtransactions as they listen, they can directly monetize their music and immediately pay everyone involved with its production.

As I point out above, ads may still be around, but they will act differently. Users using Podcasting 2.0 compatible apps while listening to the ads in a podcast could potentially get paid for that time. Advertisers could designate a portion of their ad budget to make this a reality. Hopefully getting much more accurate data on the cost of user acquisition that allows them to make better decisions around spends.

This is just a rushed and not thoroughly fleshed out version of the vision in my head. About to go meet my parents for dinner but hope to bring some of these ideas to market over the next year at TFTC. Be on the lookout!