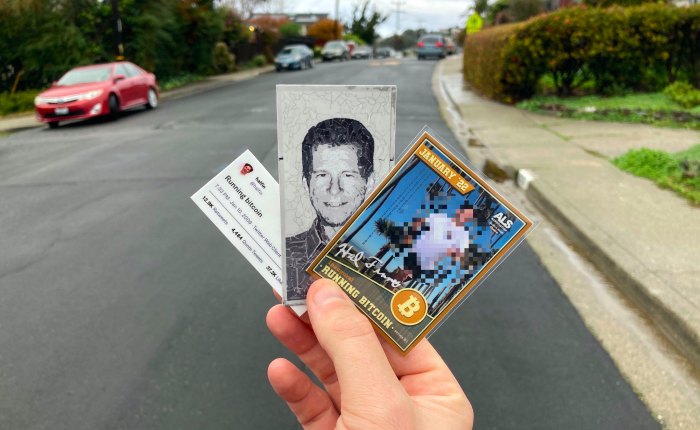 Finney was diagnosed with ALS on August 5, 2009, and passed away in August 2014, after living courageously with the disease for five years. The Running Bitcoin Challenge is being organized by Hal Finney’s family with the help of Bitcoin artist cryptograffiti, seeking to increase awareness about ALS and raise money to fight the autoimmune disease. ALS currently impacts the lives of 10,000 U.S. citizens and their families.

Funds donated through the initiative will go to the Golden West Chapter of the ALS Association, which gives much-needed support to those diagnosed with ALS and their family members in 31 counties in California and Hawaii. The nonprofit also works to increase the funding dedicated for research on the disease with no known cause or cure.

Donations can be made in bitcoin through this webpage, while credit card donations are accepted on this page. Those interested in receiving a tax receipt for their bitcoin donation should email run@alsagoldenwest.org.

Bitcoiners who join the challenge to help raise funds will win prizes while honoring the memory of early Bitcoin enthusiast Hal Finney. He was one of the first on the cryptography mailing list to which Bitcoin creator Satoshi Nakamoto sent his famous “I’ve been working on a new electronic cash system” email to show interest and interact positively with the idea of Bitcoin. The two quickly started collaborating, and Finney became one of the first known people besides Nakamoto to run the Bitcoin client when he tweeted “Running bitcoin” on January 10, 2009. Two days later, Finney received the first bitcoin transaction, on block 170, from Nakamoto himself.

Running Bitcoin Challenge participants who raise $100 will get one sticker of Finney’s most famous tweet, while those who raise $300 will also win two extra stickers, one of which features a never-before-seen image of Hal Finney limited to 100 copies. Bitcoiners willing to go the extra mile can undertake Finney’s most beloved run, the half marathon, and win even more gifts. An individual who raises $300 and runs a total of 13.1 miles between January 1 and 10 will receive all three stickers plus a limited edition gaiter. The running challenge will be available on the Strava app, where runners can join and log their miles.

Donate BTC through this link or U.S. dollars via this page. For tax receipts, email run@alsagoldenwest.org. Find more information on the Running Bitcoin Challenge webpage.