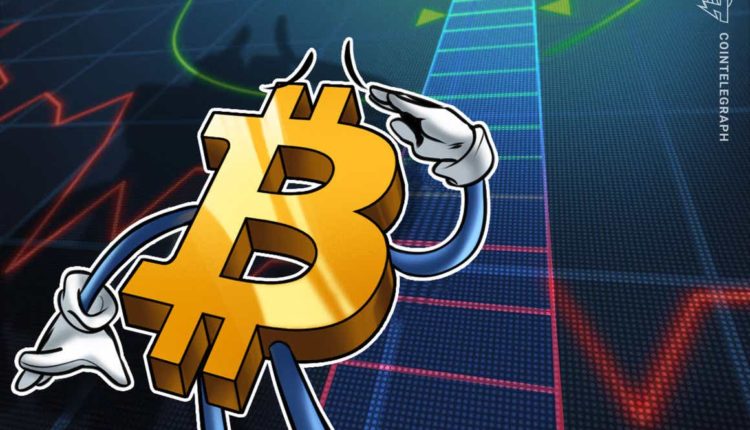 Bitcoin (BTC) could target a massive $333,000 by May 2022 if the U.S. Federal Reserve provides a “perfect storm” of low rates, a new prediction argues.

Analyst: “You don’t have enough crypto” for 2022 bull run

After acting almost to the letter throughout 2021, BTC/USD stands to make huge gains in the coming six months if conditions remain the same.

The Fed is poised to make two interest rate hikes next year, and these are likely priced in, pundits say — but a surprise change of tact could have far-reaching consequences.

For Filbfilb, analyzing Fibonacci sequences alongside historical price action in previous halving cycles, Bitcoin could surge past $300,000 as a result of Fed officials toning down rate hikes.

“To get there parabolically, we would probably need a perfect storm of the Fed being unable to raise rates (which are probably priced in) and heightened inflation, leading to a flight to safety in BTC,” he told Cointelegraph.

An accompanying chart, posted on Twitter in December 2018 as BTC/USD bottomed out at $3,100, shows just how predictably the price action has run since.

“You don’t have enough crypto for what will happen in 2022.”

As astounding as it may sound, such a scenario is — at least technically — not as far-fetched as it seems.

Signs are already pervading the market, as more and more indicators line up to demand a breakout to the upside. Even low-timeframe data is encouraging — Dec. 27, for instance, saw BTC/USD close a four-hour candle above the significant 200-day moving average (MA) for the first time in six weeks.

The last time that an uptrend achieved the same feet was in late September, at the start of a run-up which produced the current $69,000 all-time highs.

Candle closes in about an hour.

It could be the first close above the 200ma in 6 weeks.

Price action prior to the last cross looked similar.

Stocks could win big — but not for long

On the topic of macro movements, the future looks bright for stocks as well amid a cooling U.S. dollar, commentators argue — even if rates do increase as expected.

Related: Countdown to the yearly close: 5 things to watch in Bitcoin this week

“I think you may see Stock Market go way up in next couple months as “end of pandemic” narrative continues,” he forecast.

“This gives Fed cover to raise rates after QE zero. After market digests & realizes economy has been decimated, then sees impact of higher rates, downside could be big.”

The impact on Bitcoin in such a scenario would thus depend on its correlation with stocks, and whether it could rebound from a sudden downturn like the one Gammon suggests in a manner similar to March 2020.

Regardless, popular opinion remains convinced that the peak is not yet in for Bitcoin after the about-turn in early December.